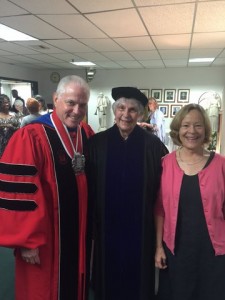 Hartford Seminary professor Miriam Therese Winter was awarded the honorary Doctor of Humane Letters degree from the University of Hartford at its graduation ceremonies on Saturday.

The University of Hartford gave these reasons for awarding the degree:

“Miriam Therese Winter, as an award-winning composer and author, musician, and educator, for more than five decades you have helped a worldwide following explore new and authentic ways of living faith fully.

Known affectionately as MT to students, colleagues, and fans, you have nurtured an inspired love for poetry and music since childhood. Although you entered the Medical Mission Sisters to become a physician, you accepted the call of music and have healed the spirit of thousands around the world — in place as disparate as Thailand and Ethiopia — as a singer of songs.

A pioneer in introducing folk-style liturgical music into Catholic tradition in the wake of Vatican II, you saw your first recording, “Joy Is Like the Rain,” achieve gold and your “Mass of Pilgrim People” premiere at the first ecumenical concert ever at Carnegie Hall.

At Hartford Seminary, with your cross-cultural vision and your deeply rooted feminist perspective, you founded the Women’s Leadership Institute and were instrumental in establishing a Master’s degree in Transformative Leadership and Spirituality.

Miriam Therese Winter, for your intensity of spirit, your service to the poor and powerless, and your scholarly pursuit of a more just and peace-filled planet, the University of Hartford is proud to present you with the degree Doctor of Humane Letters, honoris causa.