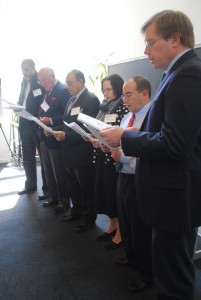 The Hartford Seminary Board of Trustees welcomed three new members at the Annual Meeting on May 9th on campus. Two newly-appointed trustees, Clare Feldman and Dean Ahlberg, will serve three-year terms, while faculty trustee Feryal Salem was appointed to a two-year term.

Dean Ahlberg was born in Hartford and reared on Long Island; Senior Minister, Dean C. Ahlberg, has served First Church in Redding since 1990. Prior to his arrival in Redding, Dean served for five years as the Associate Minister of the First Congregational Church of Old Lyme, CT. He is a graduate of Williams College (B.A., 1981), Yale University Divinity School (M. Divinity, 1985) and, most recently, Hartford Seminary (Doctor of Ministry, 2005). Dean’s doctoral dissertation, entitled Our Identity: The Story That Gathers Us In, Sends Us Out (The Role of History and International Partnership in Strengthening a Congregation’s Self-understanding), offers insights on historical and contemporary facets of “the church at the center.”

Faculty Trustee Feryal Salem is Assistant Professor of Islamic Scriptures and Law at the Macdonald Center for the Study of Islam and Christian-Muslim Relations, Co-Director of the Islamic Chaplaincy Program, and Associate Editor of the Muslim World at Hartford Seminary. Her research specializes on early Islamic thought with an emphasis on the foundations of Islamic scripture, hadith methodology, Sufism, and hermeneutics in classical Islamic texts. She received her Ph.D. in Islamic Studies from the University of Chicago’s Department of Near Eastern Languages and Civilizations.  Her forthcoming book, The Emergence of Early Sufi Piety and Sunni Scholasticism: ‘Abdallah b. al-Mubarak and the Formation of Sunni Identity in the Second Islamic Century, which will be published as a part of Brill’s Islamic History and Civilization series, explores the formative period of Islamic thought as embodied in the foundational role of Ibn al-Mubarak. It also examines related topics such as the development of Islamic theology, law, prophetic traditions (hadith) and Sufism as part of the Islamic scholarly tradition.