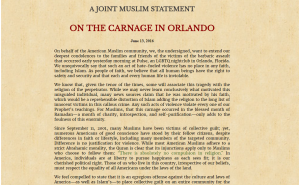 On behalf of the American Muslim community, we, the undersigned, want to extend our deepest condolences to the families and friends of the victims of the barbaric assault that occurred early yesterday morning at Pulse, an LGBTQ nightclub in Orlando, Florida. We unequivocally say that such an act of hate-fueled violence has no place in any faith, including Islam. As people of faith, we believe that all human beings have the right to safety and security and that each and every human life is inviolable.

We know that, given the tenor of the times, some will associate this tragedy with the religion of the perpetrator. While we may never learn conclusively what motivated this misguided individual, many news sources claim that he was motivated by his faith, which would be a reprehensible distortion of Islam adding the religion to the long list of innocent victims in this callous crime. Any such acts of violence violate every one of our Prophet’s teachings. For Muslims, that this carnage occurred in the blessed month of Ramadan—a month of charity, introspection, and self-purification—only adds to the foulness of this enormity.

Since September 11, 2001, many Muslims have been victims of collective guilt; yet, numerous Americans of good conscience have stood by their fellow citizens, despite differences in faith or lifestyle, including many members of the targeted community. Difference is no justification for violence. While most American Muslims adhere to a strict Abrahamic morality, the Quran is clear that its injunctions apply only to Muslims who choose to follow them: “There is absolutely no compulsion in religion.” In America, individuals are at liberty to pursue happiness as each sees fit; it is our cherished political right. Those of us who live in this country, irrespective of our beliefs, must respect the equality of all Americans under the laws of the land.

We feel compelled to state that it is an egregious offense against the culture and laws of America—as well as Islam’s—to place collective guilt on an entire community for the sins of individuals. “No soul bears the sins of another,” says the Quran.

Three days ago, Americans honored the memory of one of the greatest and most beloved men in American history: Muhammad Ali, who was a devout Muslim. The Islam Muhammad Ali followed is one of love, tolerance, and respect for all. American Muslims everywhere felt that he ended, once and for all, the vacuous claim that one cannot be both Muslim and American.

We, as American Muslims, follow the openhearted and inclusive Islam of Muhammad Ali and completely reject the hatred, provincialism, and intolerance of those who trample upon the rights of others, besmirching and defiling the name of Islam. The criminal who took the lives of dozens of patrons of the Orlando nightclub and injured many others was an aggressor, plain and simple. The Quran says, “Do not be brutal or commit aggression, for surely God does not love brutal aggressors.”

There are extremists in America and abroad who view the world through a Manichean lens: American Manicheans want Americans to see themselves as entirely “good” and all Muslims as entirely “evil.” Muslim Manicheans want Muslims to see themselves as entirely “good” and all Americans as entirely “evil.” This is a catastrophic recipe for unrelenting violence, and it must be rejected: We will not allow the extremists to define us, mold us in their benighted image, or sow the seeds of discord among us. We are one people, so let us all in good conscience and human solidarity reject this extremist narrative and assert our shared humanity and mutual respect for the sanctity of all human life.

For further inquiries, please email us at: admin@orlandostatement.com