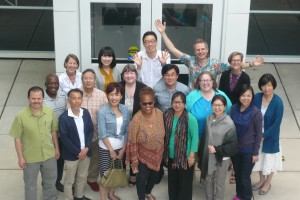 For the second consecutive year, Hartford Seminary hosted a group of experts for a week-long class in The Spirituality and Practices of Asian Religions.  The class, which ran from June 13-18, was supported by a generous grant from the Shinnyo-En Foundation, a Buddhist organization based in White Plains, NY.

Fifteen students, including a group that traveled from Japan, were enrolled in the week-long intensive, which featured a visit to the Shinnyo-en Temple in White Plains.

The course was launched in 2015 to meet an expressed need in the community to learn more about Dharmic religions. As in 2015, the course was coordinated by Dr. Michiaki Okuyama, a professor at Nanzan Institute for Religion and Culture.

Expert instructors for the week included Dr. Alison Melnick of Bates College, Dr. Clark Chilson of the University of Pittsburgh, Dr. Jean DeBernardi of the University of Alberta, and Dr. Kenta Kasai of the Center for Information on Religion. The course introduced students to religious life and spirituality throughout Asia, with a focus on daily practices. Instructors were specialists in Indian, Chinese, Korean and Japanese religions.

More photos from the course can be found here.