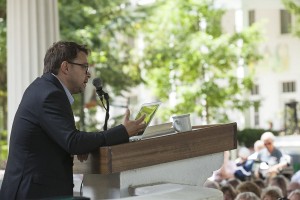 Professor Timur Yuskaev spoke at Chautaqua Institution in upstate New York on Thursday, August 4th as part of a weeklong interfaith look at Religious Voices in the City. Yuskaev’s talk was titled “When Push Comes to Shove: Deeper Politics of Religious Pluralism”. The Chautaqua Institution also publishes a daily news section and featured Yuskaev in two articles, one the day before the talk and one after:

You can view Prof. Yuskaev’s entire talk below.