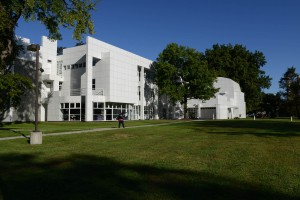 The Connecticut Chapter of the American Institute of Architects has nominated Hartford Seminary’s Richard Meier-designed building for the annual Connecticut Treasures category of its People’s Choice Competition.

Hartford Seminary will be the one Hartford County choice in the competition, for which online voting will be open from Sept. 12-23 at this website. The state architects group has also nominated a building in each of Connecticut’s other seven counties. At the end of the voting, one building will be designated a “Connecticut Treasure.”

Once the voting opens, we encourage everyone to vote for Hartford Seminary!

The Connecticut Treasures program, according to the architecture group, “features the wealth and diversity of buildings from each of the eight Connecticut counties.” The contest has been designed to promote the cultural resources of the state and to highlight its architectural gems.

Hartford Seminary’s distinctive building at 77 Sherman St., which opened in 1981, was designed by Pritzker Prize-winning architect Richard Meier. For more information about Richard Meier and the building itself, visit this page on our website.