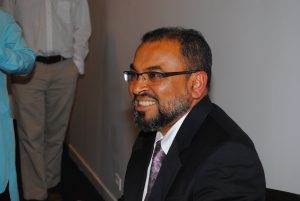 Dr. Reza Mansoor had many reasons to write Stigmatized: From 9/11 to Trump and Beyond – An American Muslim Journey, but one of the most compelling was the negative perception that American have about Muslims.

In his talk at Hartford Seminary on September 22, Dr. Mansoor noted that Muslims were negatively viewed by about 17 percent of the U.S. population after 9/11. Now, in the run-up to a particularly divisive election, the negative view stands at 50 percent.

Dr. Mansoor’s book tells the story of American Muslims through his personal journey in founding the Muslim Coalition of Connecticut and serving as President of the Islamic Association of Greater Hartford. The book, which took three years to research and write, celebrates the community service and outreach performed by those groups and others, but also “encourages Muslims to get involved in the process.”

“It is vital that we engage our neighbors in every way possible,” he said.

For more information on the book, visit this link.

Dr. Reza Mansoor is board certified in Internal Medicine and Cardiology and practices as a Cardiologist at Hartford Hospital. He completed his medical degree from St. George’s University School of Medicine in 1992. He completed his medical internship at the University of Connecticut in Internal Medicine 1992-1995. He was a Chief Medical Resident at Hartford Hospital from 1995-1996 and received his Cardiology fellowship from the University of Connecticut (Hartford Hospital program) from 1996-1999. He is an Assistant Clinical Professor of Medicine at the University of Connecticut School of Medicine. Dr. Mansoor is President of the Islamic Association of Greater Hartford, Advisory Board Member of Muslim Student Association-CT Council, and Founding President of the Muslim Coalition of Connecticut. He is a past president of the Islamic Center of Connecticut and Islamic Council of New England. He is actively involved in the inter-faith community and provides ongoing didactic presentations on Islam. He is First Vice-chair of the Board of Trustees of Hartford Seminary and was a member of the Board of Trustees of Covenant Preparatory School in Hartford.