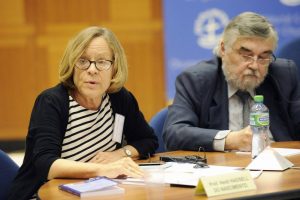 President Heidi Hadsell was in Geneva, Switzerland, on Sept. 30 and Oct. 1 for Muslim-Christian dialogue with religious leaders from Egypt in conjunction with a meeting of the World Council of Churches.

“Due to Hartford Seminary’s well known work in Christian-Muslim relations, I was invited by the World Council of Churches to participate in the dialogue,” President Hadsell said. “I found the dialogue fruitful especially in that we discussed  how we could encourage Muslims and Christians working on peace building together  in various concrete ways.”

Dr. Ahmad al-Tayyeb, the Grand Imam of Cairo’s Al-Azhar mosque, gave a public lecture on “the responsibility of religious leaders for achieving world peace” as well as to participate in dialogue on interreligious peacemaking.

The theme “Towards an Integrated World,” according to Dr. Agnes Abuom, moderator of the WCC Central and Executive Committees, “is an important reminder both that we cannot make simplistic divisions, such as between east and west,” and it also “reminds us that events, actions, movements in certain parts of the world affect and are affected by what happens in other regions.”

For a full account of the meeting, visit this link at the World Council of Churches website.