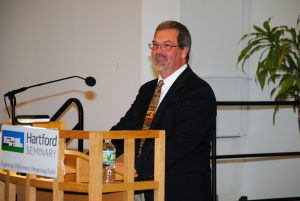 Prof. David D. Grafton, the newest faculty member at Hartford Seminary, gave a lecture introducing himself to the community on Nov. 2, 2016, and describing his life along the “margins” of both Christianity and Islam.

His presentation, Walking along the Margins: Reflections on the Contested Imperatives of Jihād and Mission among Christian and Muslim Communities, began with a description of how he first became interested in Islam after having lunch with scholar Seyyed Hossein Nasr in the mid-1980s.

Though he is a practicing Christian and Luther pastor, Prof. Grafton said, “I found myself irresistibly drawn to the study of Islam.” That decision, he said, sometimes creates an aura of suspicion among both Christians and Muslims.

Prof. Grafton also discussed the terms “jihad” and “mission” and how each one can be misinterpreted or contested by both faith communities. Both terms have multiple meanings and can be viewed in a variety of ways.

“Most of us embrace this complexity and ambiguity in our own faith lives,” but not necessarily in that of others, he said.

The entire lecture can be viewed here.