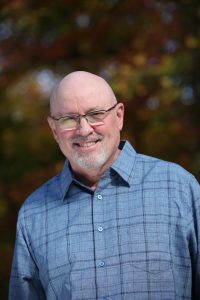 Father Carl Chudy has always been committed to the world outside his religious tradition. As a priest of The Xaverian Missionaries USA, an international order of the Catholic Church, he has lived and worked in Asia, Africa, and varied parts of the United States, “walking in the world beyond Catholicism and bringing that world back to the Church.”

He has distinct memories of being in the Philippines and partnering with an imam to offer spiritual support to widows on a hunger strike who had lost their spouses to state-sponsored violence. As priest and imam, Catholic and Muslim, Carl and his counterpart decided to walk among the beds and quietly speak with each woman, eschewing preaching or public gestures. “We were both there for the same human need,” Carl recalls, and he knew intrinsically that “we live in this big, wide world together, and it’s not by accident. God has something in mind here.”

In the same manner, it is not by accident that Carl is presently studying in the Master of Arts in Transformative Leadership and Spirituality program. He has followed in the footsteps of a missionary brother who took classes here previously, and after looking at Hartford Seminary side by side with other institutions, he was drawn to the diversity of the student body at Hartford. As he previewed course titles and descriptions, he found himself saying over and over, “This is cool … this is cool,” and then was gratified to discover the intentionally multifaith faculty and student body that grounds the academic learning in real people and relationships. “At Hartford Seminary, folks are grounded in their own traditions, then willing to do the work to look beyond them.”

In addition to his commitment to Christian-Muslim exchange, Carl is deeply engaged in Catholic-humanist dialogue. (Check out his writing on the patheos blog Secular Spectrum.) He finds God “between the lines,” and is drawn to work with people who are similarly between or outside the lines of religious identity and tradition. Given that there is presently a “Catholic bleed — 30 million American ex-Catholics,” Carl often encounters people who find themselves outside of places they once fit, outside of traditions to which they belonged. Their voices continue to shape his intention “to be part of a needed balm of healing in this terribly fractured world.”

For people within, between, and beyond religious traditions, Hartford Seminary is a place to “get off the train of thought that we’re the only ones in the world — it’s a place to honor diversity and pluralism.” To learn more, contact Tina Demo or Jennifer Sanborn in our Admissions Office at admissions@hartsem.edu.