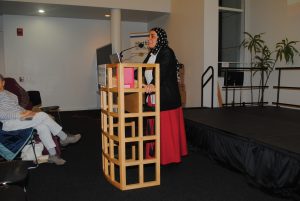 Prof. Feryal Salem spoke about her first published book to an appreciative audience on Monday. She described Ibn al-Mubārak, the subject of her monograph, as the “Forrest Gump of the 2nd Islamic Century.”

There are two main questions addressed in The Emergence of Early Sufi Piety and Sunnī Scholasticism: ʿAbdallāh b. al-Mubārak and the Formation of Sunni Identity in the Second Islamic Century, Prof. Salem said. One is “What is Sunni Islam?” and the other is “What are the origins of Sufism?”

The video of her entire address can be viewed here: