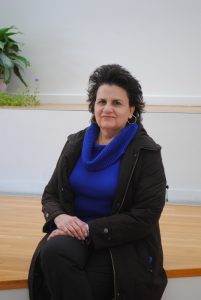 As it does for many alumni/ae, Hartford Seminary holds a special place in the heart of Janice Lautier of Southington, CT. And like many alums, the story of how she found the school has its roots in heeding a call from God.

Janice was a special education administrator when she felt the beginnings of a calling to “devote my life to what God was looking for in me.” Since she wasn’t sure exactly what that was, she began on the path of discernment, beginning to recognize and affirm what she was feeling as it became grounded in a contemplative prayer practice.

The path unfolded in a way she would not have expected nor could have imagined. Her journey helped her to realize that Catholic women could be chaplains, which intrigued her as a way of answering God’s calling. The search for training in that field eventually led her to Hartford Seminary, where she asked to sit in on a class in 2011.

That class turned out to be pastoral counseling with Ben Watts, Faculty Associate in Religion and Community Life.

“As soon as I sat down, it went beyond the experience of being inspired academically,” she said. “There was a joy there. I was mesmerized.”

Before long, Janice had enrolled in the Master of Arts with a focus in Spirituality. Classes with Professor Miriam Therese Winter and President Heidi Hadsell, she said, were transformative in a way that went way beyond the classroom. She also met students of all ages from different countries and different faiths.

“It brought the world to me,” she said.

Janice earned her MA and went on to become board certified through the National Association of Catholic Chaplains. She did her Clinical Pastoral Education (CPE) at Griffin Hospital in Derby, and in short order, she was hired as a chaplain there. She is now the Director of Spiritual Care and Education.

Janice credits Professor Winter with helping her to understand that “everything unfolds.”

“The beauty of being here is that I met people of any faith and was offered a multitude of perspectives.” she said. “It led me to a deeper sense of spirituality. … It changed the way I saw things and so many doorways opened.”

After taking the Seminary’s signature “Dialogue in a World of Difference” class, for example, Janice decided to visit a Sikh temple she had passed many times in Southington. That was something she never would have thought to do before attending Hartford Seminary.

“I went in one day and they couldn’t have been nicer,” she said. “They invited me to a wedding!”

Hartford Seminary is a safe and very welcoming place to discover spirituality in yourself and others, Janice said. She credits it for allowing her to live out what God was calling her to do.

“It’s really about becoming who you were meant to be.”