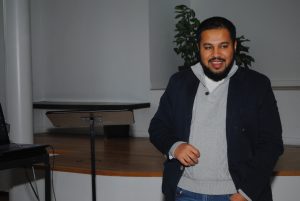 Sami Aziz, a 2015 graduate of Hartford Seminary’s Islamic Chaplaincy Program who is now enrolled in our Doctor of Ministry program, has opened a business called Common Ground Services to build bridges and educate communities on a myriad of hot-button topics surrounding Muslims.

Sami, who started Common Ground in 2015, has been to over 100 venues for presentations on Islam, including libraries, churches, colleges and high schools. He speaks on topics from Islamophobia to Islam 101, jihad, hijab, Shi’a vs. Sunni, as well as other topics. He gives presentations, facilitates dialogue, holds trainings, and collaborates with organizations on how to best meet their needs. His goal for the audience is an understanding of what Islam is and isn’t, with the goal of developing in-depth, interfaith communication.

“No one else was doing this, and those who could weren’t doing it justice,” he said after a presentation at Hartford Seminary in December. Sami saw the need for an organization that would be properly staffed, as well as speakers who could engage the audience instead of lecture.

Sami considers Common Ground Services an Islamic consulting firm, filling in gaps for community and faith leaders that may have been left open. Often, he said, imams who work at mosques are a one-man show and are so busy they can’t respond quickly to those outside their community.

While the organization is still young, it is thriving and growing. New organizations, churches, and communities call Sami each week asking him to facilitate discussions or present on a given topic.