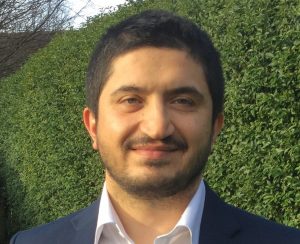 President Heidi Hadsell is pleased to announce that Dr. Seyfeddin Kara will occupy the Imam Ali Chair in Shi’i Studies and Dialogue among Islamic Legal Schools. The chair is the first dedicated to Shi’i Studies in North America. It provides a voice in the academy for Shi’i Islam and encourages dialogue among different schools of Muslim legal thought.

“Dr. Kara is part of a new generation of international scholarship in Shi’i Islam. His approach to the material and the questions he asks are fresh and creative,” President Hadsell said. “His appreciation for and experience with the importance and richness of the dialogue between schools of Islamic thought are also part of the considerable contribution he will make to his field and to all of us at Hartsem.”

He is the author of numerous articles and chapters, and organized the project “Working Towards a Long-Term Solution to Internecine Muslim Violence” for the Universal Justice Network. He will begin work in July as Assistant Professor for Shi’i Studies and Relations between Islamic Schools of Thought.

“By establishing the Imam Ali Chair for Shi’i Studies and Dialogue among Islamic Legal Schools, Hartford Seminary is yet again playing a pioneering role in developing community relations,” Dr. Kara said. “What makes this position even more special is that, in the current climate of intra-religious tension, it holds a unique responsibility to work towards understanding the causes of tension and defusing them, through engaging with the community and carrying out rigorous academic research. I feel extremely privileged to be appointed to such an important position.”

Dr. Mahmoud Ayoub, now retired from teaching at Hartford Seminary, was the driving force behind the Imam Ali Chair, which was established in 2015. The first and present occupant of the chair is Dr. Sayed Ammar Nakhjavani, who is known around the world as a speaker and was named to the list of The 500 Most Influential Muslims.

The reason for the chair, Dr. Ayoub said at the time it was inaugurated, is not to create a rival program for the study of Sunni Islam, which encompasses about 85 percent of Muslims. It is to include the voice of Shi’i Islam at an institution that has such a special history and role in Christian-Muslim relations and to work toward Muslim unity.

Dr. Kara, he said, is an excellent person to fill that role because of his understanding of both Shi’i and Sunni scholarship and his active participation as a scholar.

“His work on human rights is very good for the Seminary,” Dr. Ayoub said. “He will fit here quite well.”