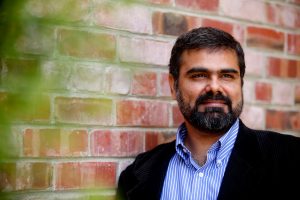 Ask Dr. Mahan Mirza how he benefited from a Hartford Seminary education, and he will mention three skills he acquired here: “The ability to listen, the ability to find my own voice, and the practice of peacemaking.”

Dr. Mirza graduated in 2003 with an MA with a focus on Islam and Christian-Muslim relations. Since his days at Hartford Seminary, he has completed his Ph.D. in religious studies from Yale University, helped develop America’s first accredited Muslim liberal arts college (Zaytuna College), and is currently a Professor of the Practice in the Contending Modernities program at the Kroc Institute for International Peace Studies at the University of Notre Dame.

Dr. Mirza credited Hartford Seminary with giving him the ability to thrive at different institutions among those practicing different faiths.

“Hartford Seminary prides itself in peacemaking,” he said. “I can understand the need to have fidelity to a tradition that binds you, but also invites you to be creative, and even though the faith commitments are different, it’s the emotions I can identify with and relate to in spite of difference. In today’s world, that is very refreshing.”

Dr. Mirza’s undergraduate degree was in Mechanical Engineering. Then he learned about Hartford Seminary. “I had two friends studying [at Hartford Seminary] and they said it was a great place that would receive me and where I would begin to have some great conversations.”

He worked as a mechanical engineer part-time to put himself through school, and when asked about such a unique transition, he said, “I went from the dynamics of machines to the dynamics of the heart.”

“Too many,” he said, “but gatherings at the home of Professor Ibrahim Abu-Rabi immediately come to mind. We used to call him ‘the walking bibliography’ because his home was full of books, and whenever he referred to any of the thousands of references he seemed to have on the tip of his tongue, he would invariably blurt out the publisher and date along with the title and author.”

Reflecting on the journey he’s taken since studying at Hartford Seminary, he said the most challenging elements were “coming to terms with the depth, sincerity, humanity, coherence, and even beauty of beliefs other than my own.”