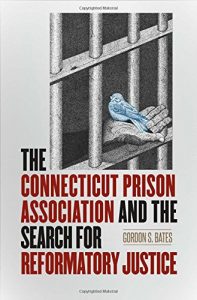 Congratulations are due to the Rev. Gordon Bates, who graduated from Hartford Seminary in 1964 with a Master’s of Sacred Theology and has written a book called The Connecticut Prison Association and the Search for Reformatory Justice that hit bookstore shelves in January.

Published by Wesleyan University Press, the book “looks at the role the Connecticut Prison Association played in the formation of the state’s criminal justice system.”

The Rev. Bates said he started volunteering in prisons and eventually became the executive director of the Connecticut Prison Association, now called Community Partners in Action (CPA). The organization “was formed to ameliorate the conditions of criminal defendants and people in prison, improve the discipline and administration of local jails and state prisons, and furnish assistance and encouragement to people returning to their communities after incarceration.”

After retiring in 1997, the Rev. Bates said, he resolved to write a history of the organization. “I started in the 19th century and worked up to today,” he said.

Hartford Seminary, he discovered, became very active in the criminal justice scene between the 1930s and the 1950s. William DeLuce Barnes, a professor of theology at Hartford Seminary, was “a key part of the whole transition” within the prison association from 1930 to 1956, serving as Agent and Secretary as well as a state legislator for two terms.  Another professor, Charles G. Chakerian, conducted research on the relationship between alcohol and crime.

The Rev. Bates now works part-time as the Minister of Visitation at First Church of Christ Congregational in Glastonbury, CT. The book is available online and in many bookstores.