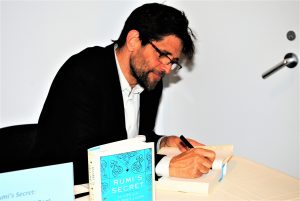 The famed Sufi poet Rumi traveled about 2,500 miles during his lifetime in the 13th century. Eight centuries later, biographer Brad Gooch embarked on a journey of his own, retracing Rumi’s steps in an effort to learn more about the spiritual teacher whose work continues to gain followers.

In a Hartford Seminary talk on February 8, Gooch spoke about his new book, Rumi’s Secret: The Life of the Sufi Poet of Love, as a process that had many stages.

Gooch first became acquainted with the Sufi poet in the early 1990s when Rumi experienced a surge of popularity in the West. In 1995, Gooch said, three different people gave him a copy of Rumi’s poems (The Essential Rumi) for Christmas.

Then, while conducting research for his book Godtalk: Travels in Spiritual America, Gooch began meeting with a group of Muslims on the Upper 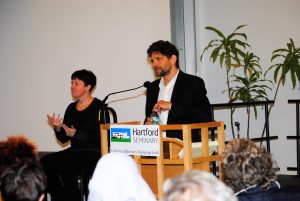 West Side of New York and became more interested in the context of Rumi’s life.

“The writer in me thought, ‘This is such a great story,'” he said.

When publishers rebuffed his Rumi idea not long after the 9/11 attacks, Gooch wrote a bestselling biography of Flannery O’Conner but later turned back to Rumi. Along the way, he learned Farsi so that he could study Rumi’s original texts and traveled the “2,500-mile map of Rumi’s life.”

“The only way to read Rumi’s poetry is to read human love and divine love simultaneously,” he said.

The video of the full talk can be viewed below.