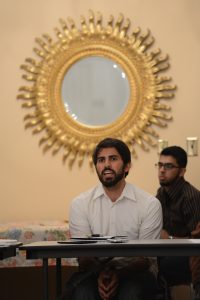 As announced in Rutgers Today, Islamic Chaplaincy graduate Kaiser Aslam has been named the first full-time Muslim chaplain at Rutgers University in New Jersey, which makes him one of the first at a public university in the U.S.

Kaiser, who graduated in 2016, was a chaplain at Wesleyan University before taking the job at Rutgers last year. He will provide spiritual guidance and counseling to an estimated 5,000 Muslims at the large university.

His appointment comes at a time when many Muslim students are concerned about the present political and cultural climate.

“It’s a very disheartening moment,” he was quoted as saying in reference to President Trump’s renewed travel ban on six Muslim-majority countries and an uptick in crimes targeting immigrant and minority communities. “There are those who were on the edge of indulging in their Muslim identity but are fearful. Some students want to practice but their families are telling them not now.”

For the full story in Rutgers today, click here.