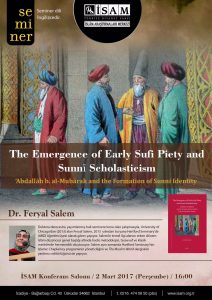 Professor Feryal Salem gave a presentation on her first book at the Turkish Center for Islamic Studies in Istanbul on March 2.

The book, The Emergence of Early Sufi Piety and Sunnī Scholasticism: ʿAbdallāh b. al-Mubārak and the Formation of Sunni Identity in the Second Islamic Century, is part of Brill’s Islamic History and Civilization series. It explores the formative period of Islamic thought as embodied in the foundational role of Ibn al-Mubarak. It also examines related topics such as the development of Islamic theology, law, prophetic traditions (hadith) and Sufism as part of the Islamic scholarly tradition.