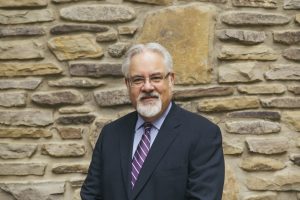 Ever since he first started at Hartford Seminary in 1999, Dr. Mark Caruana has embraced change.

He was a case worker for the Salvation Army emergency shelter in Hartford before he learned of the seminary at a public lecture, and then became interested in attending because of its focus on congregational studies.

Now, after serving at Tabernacle Baptist Church in Utica, N.Y., for 17 years, Dr. Caruana is taking on a new challenge: Dean at Houghton College Utica.

“Houghton College Utica’s target population is refugees, immigrants, and other new Americans. It will offer these students Associate of Arts classes grounded in Christian tradition from a fully accredited and nationally acclaimed private college.”

For students who come to a community as refugees and immigrants, he says, “displacement is a painful part of their story” and “the ability to stay in one’s community and with one’s family is greatly valued. Houghton College Utica allows students to remain in their community—near family, friends, and neighbors—while they earn their A.A. degree.”

Dr. Caruana credits Hartford Seminary with giving him resources to draw upon when he first began at Tabernacle Baptist Church of Utica, New York, before his work with Houghton College. Upon his arrival, the church “averaged 110 people in weekly worship with about 30 children and teens in Sunday School, as well as a dozen in youth group.”

Dr. Caruana remembers the pangs of change, but also the embracing hospitality of his congregation. “In embracing a ministry of welcome and hospitality to its newest neighbors, I believe the congregation received far more than it could have imagined.  Refugees who arrived with often little more than a change of clothing, a few family photos, and a Bible in plastic bag, brought with them rich treasures of faith.  They offered a declining and dying church the gift of renewed hope and a future.”

“Hartford Seminary provided me not only with the theory and tools to lead a congregation through significant change, but it provided me with an environment and community in which I could reflect on my leadership of a religious community. The seminary gave me the tools to really understand the demographics of a changing community and helped me to master some skills and enabled me to lead a congregation through significant change.”

During his studies at Hartford Seminary, Dr. Caruana recalls fond memories spent in classes and with staff members. He says “of course, there are individuals who made a particular impact on my life!”

“One of the courses that impacted me most during my D.Min studies was Islam and Modernity with the late Professor Ibrahim Abu-Rabi. I found that learning about another religious tradition’s varied responses to modernity provided me with a useful perspective from which to reflect on various Christian responses to the challenges and opportunities posed by modernity.”

Dr. Caruana mentions moments spent with others who helped him during his work towards his doctorate: “Kelton Cobb encouraged me to embrace a more positive understanding of the potential of institutions to embody values that shape our common life.  A conversation with Richard Valantasis in a critical moment of decision, about the nature of spiritual discernment, had a much greater impact on my life than he probably realized.  My thesis advisor, the late Karl Dudley, offered me great personal warmth and consistently insightful, pragmatic critique of my work.  I am thankful for each of these, and so many others, who made my time at Hartford Seminary so enriching and of such enduring value.”

Dr. Caruana thinks back to his most challenging obstacles while working towards his doctorate, and says “I think balancing the challenges of classes, a pastorate, a congregation that was experiencing changes, and family life—finding the time an making it work. Looking back now, I’m not certain how I did it. The truth is, it’s not something that I did alone; I would not have been able to do anything without the support of my wife and my daughters, and the members of the church.”

Though confronted with many seasons of change and uncertainty, Dr. Caruana thanks Hartford Seminary and rests assured in God’s planning. “If God calls us to ministry, God will provide the resources.”