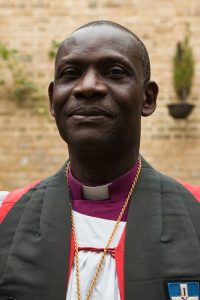 Hartford Seminary’s 2017 graduation speaker is a graduate of our Doctor of Ministry program who has gone on to become an Archbishop and an expert in Christian-Muslim relations.

His biography states: The Most Reverend Josiah Idowu-Fearon is a Nigerian Archbishop appointed in July 2015 as Secretary General to the Anglican Communion, a family of 44 churches in 165 countries with 85 million members.  He is based in London but travels widely at the request of member churches and is in demand as a speaker both in the UK and throughout the Communion.  Originally intent on a career in the army, he had a strong conviction that he should be a priest and then “decided to rely on Jesus Christ and no other.”

Archbishop Idowu-Fearon holds qualifications from Nigeria, the U.S., Jordan, as well as Durham and Birmingham in the UK.  He was a bishop in a largely Muslim area of Nigeria and is an expert in Christian-Muslim relations.  He chairs the program for Christian-Muslim relations in Africa, is a member of the Tony Blair Faith Foundation, and one of the first three presidents of the Anglican Communion Network for Interfaith Concerns.  A ‘Six Preacher’ in Canterbury Cathedral, he is also now an Honorary Assistant Bishop in the Diocese of London, where he will carry out episcopal functions as time permits.

The youngest of seven children, Archbishop Idowu-Fearon is married with three children, one of whom died of meningitis in 2009 while studying medicine at Bristol University. He is a keen squash player.

Graduation is scheduled for May 12 at 4 p.m. on the front lawn of the Seminary.