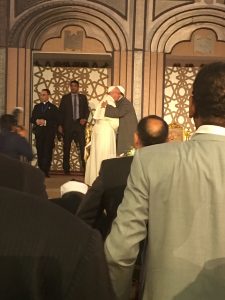 President Heidi Hadsell, one of the main speakers at a gathering of Muslim leaders and representatives of the World Council of Churches in Egypt, also participated in the Al-Azhar International Peace Conference on April 27 and 28 and was there to attend an address by Pope Francis that was covered by press around the world.

President Hadsell sent the picture at left that shows the Pope embracing Dr. Ahmad Al-Tayyeb, the Grand Imam of Al-Azhar and Chairman of the Muslim Council of Elders.

In his address, Pope Francis made a wide-ranging call for peace, centered on educating the young.

”Decisions are needed for our own future, decisions of peace and for peace, for there will be no peace without the proper education of the coming generations. Nor can young people today be properly educated unless the training they receive corresponds to the nature of man as an open and relational being,” he said.

The Pope also rejected the association of Islam with terror, which Dr. Ahmad Al-Tayyeb, the Grand Imam, said he appreciated.

”There will be no solutions to the problems the world is experiencing today without true understanding of the divine messages, spread of human and ethical values, promotion of values of peace, justice, equality as well as respect for the human being regardless of his religion or ethnicity,” Dr. Ahmad Al-Tayyeb said.