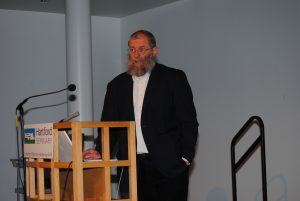 Professor Yahya Michot gave an illustrated talk on Thursday, April 6, detailing the life of an earlier professor who had a profound influence on Hartford Seminary.

Duncan Black Macdonald, who was born in Scotland and studied in Glasgow, joined Hartford Seminary in 1892 as an instructor of Hebrew and later also taught Arabic. For much of his forty years at the Seminary, he focused on preparing missionaries.

Professor Michot’s talk focused on four main areas: Missions, Islamic Studies, Arabian Nights and Hebrew Studies. He illustrated his talk with slides that show the breadth and depth of Duncan Black Macdonald’s books and papers, many of which reside in Hartford Seminary’s library, including his extraordinary collection of Arabian Nights tales.

“The Seminary today would not be what it is if this Presbyterian minister had not been at the Seminary for 40 years,” Professor Michot said.

A life-changing sabbatical to Egypt and the Middle East in 1908-09 greatly influenced Duncan Black Macdonald, Professor Michot said. He showed a number of slides that were taken just over a century apart when Professor Michot visited some of the same locations in Cairo as Professor Macdonald.

His experience with Muslims during his trip influenced the way he thought about the mission work being conducted in other countries, Professor Michot said. When he returned to Hartford, he wrote and spoke eloquently about building bridges and making efforts to understand Islam and other religions.

The full video of Professor Michot’s presentation is available below.