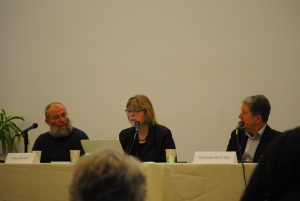 President Heidi Hadsell called it a “foray into a new conversation” as Hartford Seminary welcomed a special edition of The Muslim World journal focusing on Hindu-Muslim relations at a panel discussion on April 20.

Founded in 1911, and sponsored by Hartford Seminary since 1938, The Muslim World journal is edited and published quarterly by Hartford Seminary’s Macdonald Center for the Study of Islam and Christian-Muslim Relations and Wiley-Blackwell. This scholarly journal, which reaches subscribers in 65 countries, is dedicated to the promotion and dissemination of scholarly research on Islam and Muslim societies and on historical and current aspects of Christian-Muslim relations.

The Muslim World started as a missionary journal but has evolved over the 100-plus years of its existence, according to Professor Yahya Michot, one of its editors. “We have tried to open up new horizons and build new bridges,” Professor Michot said in his introductory remarks on April 20. Recent special issues have focused on the relationship of Muslims with various other faiths.

The co-editors of the special edition in Hindu-Muslim relations — Lucinda Mosher, Faculty Associate in Interfaith Studies at Hartford Seminary, and Shaunaka Rishi Das, Director of the Oxford Centre for Hindu Studies at the University of Oxford — spoke about their efforts to put the special issue together and about its significance.

Dr. Rishi Das said the act of putting the issue together was a step toward establishing an area of study, “an important step because there’s so little out there” about Hindu-Muslim relations.

The video of the panel discussion can be viewed below.