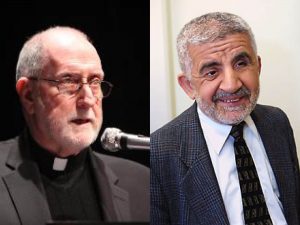 Both have distinguished themselves in interfaith study and teaching, and they have a personal connection as well. They met each other while attending Harvard University, where both earned Ph.Ds.

Dr. Ayoub was educated at the American University of Beirut (BA, Philosophy, 1964), the University of Pennsylvania (MA, Religious Thought, 1966) and Harvard University (Ph.D., History of Religion, 1975).

For many years, Dr. Ayoub was a professor and Director of Islamic Studies in the Department of Religion at Temple University in Philadelphia. He later came to Hartford Seminary as a Faculty Associate in Islam and Christian-Muslim Relations, retiring in 2016. He has also taught at the University of Pennsylvania, the University of Balamand (Lebanon), San Diego State University, the University of Toronto, and McGill University.

Throughout his career, Dr. Ayoub has received distinguished awards and scholarships, among them the Kent Doctoral Fellowship and the Canada Council Fellowship. He participated in the Fulbright Exchange of Scholars program for Malaysia, and undertook a research project on Christian-Muslim relations in Egypt and Lebanon, also on a Fulbright scholarship. He is the author of numerous books, including Redemptive Suffering in Islam.

Father Patrick Ryan is the Laurance J. McGinley Professor of Religion and Society at Fordham University. Ordained to the priesthood in 1968, he earned both his BA and MA in English Language and Literature at Fordham and a Ph.D. in the comparative history of religion with specialization in Arabic and Islamic Studies from Harvard University.

For about half his life as a Jesuit priest, Father Ryan worked in West Africa. He has had faculty and administrative appointments at the University of Ghana, the University of Cape Coast in Ghana, and Hekima College in Kenya, as well as the Gregorian University in Rome. He served as the first president of Loyola Jesuit College, a secondary school in Nigeria.

Father Ryan has held numerous positions at Fordham. He taught Middle Eastern Studies from 1983-1985, held the Loyola Chair in the Humanities from 1996-1998, and served as Fordham’s Vice President for University Mission and Ministry from 2005-2009.

As the focus of his work in the McGinley chair, he chose the “trialogue” of Judaism, Christianity and Islam.

The author of numerous articles, Father Ryan has published three books, including his most recent: When I Survey the Wondrous Cross: Scriptural Reflections for Lent (2004).