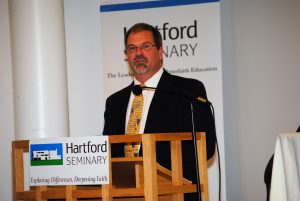 The 2107 Luce-Hartford conference, the first of four annual conferences at Hartford Seminary funded by the Henry Luce Foundation, drew about 70 participants from May 22-24 for lectures, panels and roundtable discussions.

The topic — the refugee crisis in Europe and the U.S. — was a timely one.

The Rev. Dr. David D. Grafton, Professor of Islamic Studies and Christian-Muslim Relations at Hartford Seminary, coordinated the conference. He opened the first session on Monday, May 22, by observing that very few of the conversations around refugees have taken a religious perspective.

“Muslims and Christians have an inherent spiritual connection to these topics,” he said.

Dr. Jorgen Nielsen of the University of Birmingham in Birmingham, U.K., gave the first keynote address, which focused on The Impact of the Recent Forced Migration Crisis on Christian-Muslim Relations in Europe.

Dr. Nielsen gave an overview of the history of the flow of refugees into Europe. The latest wave of migration peaked in 2015, he said.

The reaction of churches across Europe has been determined by the local context, he said, noting that in some places, churches opposed new mosques to serve the mostly Muslim refugees, while in others, churches began providing sanctuary.

Though there has a been a shift to the right in terms of welcoming refugees in the wake of terrorist attacks across Europe, Dr. Nielsen said, there is cause for optimism. The media sometimes gives undue attention to anti-Islamic sentiment even as “churches have taken a stand to support refugees.” Ultimately, he said, the crisis may have a positive effect on Christian-Muslim relations.

The text of Dr. Nielsen’s keynote can be found here: Luce-Hartford Nielsen Keynote 2017

The panel had a lively discussion about the impact of the recent executive orders on their work and agencies.

On Tuesday, May 23, conference-goers watched the movie “After Spring,” which looks at the lives of people in Zaatari, a large camp for Syrian refugees in Jordan.

Dr. Tuba Isik of the Institute of Islamic Theology at the University of Paderborn in Germany delivered the second keynote. She spoke about The Impact of the Recent Forced Migration Crisis on Muslim European Identity.

Dr. Isik pointed out that the term “Muslim” represents a wide range of linguistically and culturally diverse people. The flow of refugees into Germany, in particular, has challenged the way of life of the Muslims who were already there, she said.

“I think we need to promote dialogue anew,” she said. “To start to act and not just to speak. We need a living dialogue.”

A second panel convened on Tuesday looked at The Impact of the Crisis on Muslims and Interfaith Relations. Participating in that panel were Khalil Abdullah, Co-Director of the Faith Institute for the Atlanta Masjid of Al-Islam and Major Gifts Officer at Hartford Seminary; Tahriah Amatul-Wadud, Esq., a civil rights and domestic relations lawyer; Maryam Bittar, a J.D. student at UConn School of Law; Ertugrul Gokcekuyu of the Islamic University of Rotterdam in the Netherlands; and Imam Refai Arefin of the Islamic Association of Greater Hartford.

The panel discussed identity issues, the impact of the present political climate on Muslims in the United States and Europe, and the question of “religiosity” in Western societies. All were hopeful that a new wave of interest in social justice would have a positive long-term impact.

On Wednesday, conference-goers gathered for a roundtable session with the featured speakers and for a session on advocacy with the Rev. Dr. Joyce Antila Phipps. 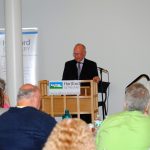 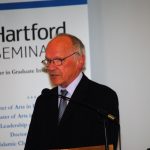 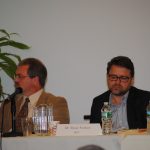 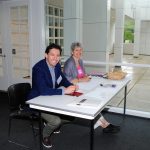 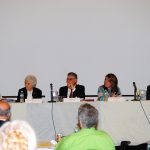 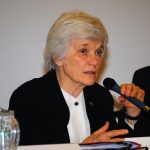 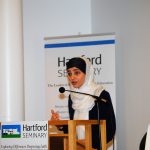 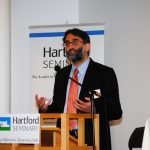 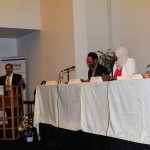 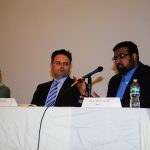 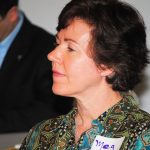 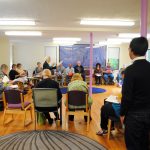