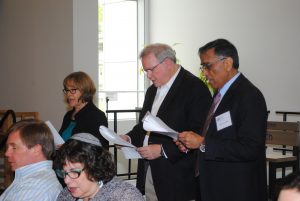 Hartford Seminary welcomed four new members to the Board of Trustees on Monday, May 8, at the Annual Meeting.

Shakeeb Alam, the Co-Founder and President of East Bridge Capital Management, L.P., a Boston-based private investment partnership. A native of the Chicago area, he is a graduate of the University of Illinois at Champaign-Urbana and Harvard Business School. Shakeeb is involved in a range of civic activities, including the Chicago Community Trust.  The Trust recently made a grant to the Seminary’s Islamic Chaplaincy program.

Nelson Rodriguez, a Financial Advisor with Barnum Financial Group in Glastonbury who has more than 18 years of experience in the Insurance and Investment space. He is a member of The Fund for Greater Hartford and serves on their Finance Committee. He is also a member of the Hartford Foundation for Public Giving; The Knox Foundation; International Hartford and served as President of the National Society of Hispanic MBA’s Connecticut Chapter.

Najib Awad, Associate Professor of Christian Theology and Director of the International Ph.D. Program, who will serve as a faculty trustee.

The Seminary also thanked two trustees leaving the board, Dr. Reza Mansoor and Fatma Antar, who were both long-serving members and will be greatly missed.

Also on May 8, the Seminary added five Corporators, who are voting members of the Hartford Seminary Corporation.  As a body, the membership is responsible for electing other Corporators and the Board of Trustees.

The five new corporators include:

Samsiah Abdul-Majid, who has worked for more than 30 years at the United Nations, mostly at their regional offices in Bangkok and New York. She also serves as Chaplain at Westchester Medical Center in Valhalla, NY. Samsiah is a graduate of Hartford Seminary’s Islamic Chaplaincy program.

Courtney Bourns, a former Hartford Seminary Trustee from 2009-2014. Courtney is a retired partner in the Hartford law firm Berman, Bourns, Aaron & Dembo. He is the founder of The Gathering Place, a charitable organization that serves as a bridge between Hartford and suburban communities. The Gathering Place is best known for the restaurant it ran in downtown Hartford. He is a member of Asylum Hill Congregational Church in Hartford.

The Rev. Dr. Kate Heichler, who is Associate Rector for Worship and Outreach at St. Columba’s Episcopal Church, the largest parish in the Diocese of Washington, D.C. Kate holds a Doctor of Ministry degree from Hartford Seminary, M.Div. and STM degrees from Yale Divinity School, and a BFA from NYU.  Prior to moving to DC, she was Executive Director of the Interfaith Council of Southwestern CT, based in Stamford. Kate is a writer, speaker, retreat leader and, in earlier life, a playwright.

Kate McLean, a teacher and director at the First Church Nursery School in Windsor for over 20 years. She held leadership positions at the First Church of Windsor and the Connecticut Conference of the UCC. She served three terms on the Board of Trustees at the Westtown School and is an Emeritus Trustee of the School. She led the Capital Fund Campaigns at Westtown School and for the Connecticut Conference (Now for the Future-the Fund for Silver Lake).

Hugh McLean, who spent time working in the Peace Corps and worked with Plowshares since 1988. Hugh and his wife Kate, worked on Plowshares’ three-year project called Globalization of Theological Education – a project funded by Pew Charitable Trust to make theological education in the United States more relevant to the needs of the world. The high point of their Plowshares Experience was working with South Africa and the connections several other members of their church made with the South African Council of Churches partner church program. Hugh also served as co-chair to their Bicentennial Capital Fund campaign.