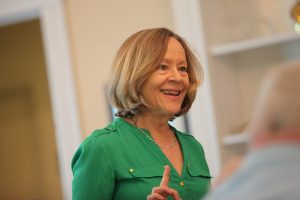 Dr. Heidi Hadsell, President of Hartford Seminary, announced on Monday, May 15, that she will retire following the 2017-18 academic year.

“I will have spent 18 intense years of giving leadership to the most creative, bold and faithful graduate theological institution I can imagine. It has been a joyful privilege and I am grateful to each person who has been and is part of this remarkable journey,” Dr. Hadsell said.

For nearly a year after her hiring in 2000, Dr. Hadsell continued to direct the Ecumenical Institute of the World Council of Churches in Bossey, Switzerland, flying back to Connecticut each month as she began her tenure as Hartford Seminary’s president.

“When we made the offer, the World Council of Churches said, ‘She can’t leave now,’ so we made a deal that she would work for both of us,” said Martin L. Budd, a Hartford Seminary Trustee who was Board Chair in 2000 and chaired the board’s search committee. “Heidi has been an extraordinary president. She will be a hard act to follow.”

Dr. Hadsell guided the Seminary through a difficult time following the attacks on Sept. 11, 2001, and then again through the economic downturn in 2008 and 2009. Vanda B. McMurtry, Chairman of the Board of Trustees, said Dr. Hadsell showed her expertise as a manager during the recession, finding a way to curtail expenses, avoid layoffs and increase foundation gifts to the Seminary.

“Heidi was able to pull us through,” he said.

During her tenure, Dr. Hadsell has raised the local, national and international profile of Hartford Seminary, which is viewed as a trendsetter in the critical area of interfaith relations. McMurtry pointed out that leaders such as President Barack Obama and the Grand Imam of Al-Azhar, His Eminence Dr. Ahmad Al-Tayyeb, have recently called upon Dr. Hadsell’s expertise.

“People are looking to her for leadership,” McMurtry said. “That clearly means that Hartford Seminary has arrived and that’s basically due to her.”

McMurtry also pointed out that Dr. Hadsell, who continues to teach Global Ethics and other courses, has a special connection to students.

“Here’s the president at the top of the institution, and she’s got a special place in her heart for the students,” he said. “It’s incredibly rare and valuable.”

Dr. Hadsell has taught at the Federal University of Santa Catarina in Brazil, the University of Southern California, and McCormick Theological Seminary in Chicago, where she also served as dean. She has published on subjects including ecumenism, environmental ethics, inter-religious relations, and the public role of religion in society. She serves on a variety of boards, both national and international.

The Board of Trustees is forming a search committee that will identify qualified candidates from around the world with a goal of having a new president in place by next summer.

“We will be looking for a person who can continue to build upon the strong foundation that Heidi has so diligently put in place during her 18 years with Hartford Seminary,” McMurtry said.