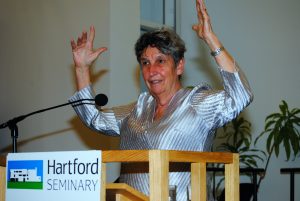 It all started when the Rev. Dr. Donna Schaper read Pope Francis’s 2015 encyclical on the environment. In it, she saw how much they had in common. Not long after, she began following him with great hope and affection and decided to write about their imagined “affair” in a volume called “I Heart Francis: Letters from the Unlikely Admirer.”

“I wrote this book because I fell in love with the Pope,” she said at a book talk on May 1.

The Rev. Schaper, a faculty associate at Hartford Seminary who teaches in the Doctor of Ministry program, believed that Pope Francis was “onto something” in his message on the connectedness of all living things. She thought he might surprise the Catholic church by calling for the ordination of women and full acceptance of the LGBTQ community.

“The platform he has laid is really important,” she said.

But ultimately, she said, their “relationship” had to end. Pope Francis has done much to change the conversation both within and outside of the Catholic Church, but he has not lived up to her high hopes.

After sending the Pope a copy of her book, the Rev. Schaper said, she received a lovely letter from him acknowledging it and sending well wishes to her congregation at Judson Memorial Church in New York City. But she still hopes he will contact her and let her know that he read the book and received its message.

In the final chapter, she writes:

“Your work has been such a blessing to so many — and it has almost taken away from the many curses your institution has also made. My institution is the same: we have bored people on their way to God — that is, when we weren’t judging them. The massive transition we are always making back to the throne of a gracious God will remain incomplete. You and I both know that. But we will still try and try and try again.”