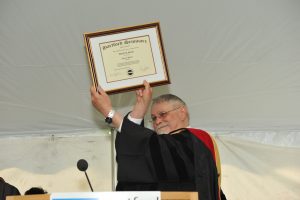 An ordained minister in the United Church of Christ, the Rev. Steinle led the Christian Activities Council, a faith-based organization focused on affordable housing and empowering the poor, for more than 30 years. The CAC, founded in 1851 as the Hartford City Missionary Society, promotes social, economic and racial justice in the Hartford region.

A graduate of Yale Divinity School, the Rev. Steinle built the CAC from one half-time employee with a budget of $150,000 to a staff of 12 with a budget of $1 million. He led the Upper Albany Revitalization Initiative, which combined housing redevelopment and neighborhood organizing around issues such as public safety and streetscape improvements.

The Reverend Donald R. Steinle, 77, of Hartford, beloved husband of Sharon C. Steinle, passed away on June 13, 2017, at home surrounded by his loving family.

He was born in Russell, Kansas, on June 27, 1939, son of the late John David Steinle and Lula Preston Steinle. He received a BS degree in Speech from Northwestern University in Chicago, Illinois, and earned a BD degree in 1965 from Yale University. The next year he earned a Master’s Degree in Divinity from the Berkeley Divinity School at Yale, where, from 1966-1970, he served as the H. Richard Niebuhr Instructor in Practical Theology.

Rev. Steinle became an ordained minister in the United Church of Christ in 1970 and served as the Senior Pastor of First Congregational Church in Passaic, New Jersey from 1970-1981. He returned to Connecticut in 1981 to become Executive Director of the Christian Activities Council in Hartford. In 2009 he joined Faith Congregational Church in Hartford, where he served as a Trustee and volunteered on the Pastoral Committee.

In 2014, after his retirement from the CAC, he was awarded an Honorary Doctor of Divinity from Hartford Seminary for his outstanding contributions to the Greater Hartford community.

He also leaves behind countless colleagues, brethren clergy, church members, students, and dear friends. In addition to his parents, Rev. Steinle was predeceased by his brother Tom Steinle. A celebration of Rev. Steinle’s life will take place on Tuesday, June 20, 2017, at Faith Congregational Church, 2030 Main St., Hartford, with visitation from 5-6 p.m. followed by special music and words of remembrance from 6-7 p.m. His funeral will take place on Wednesday, June 21, 2017, at the church, with a viewing from 10-11 a.m. followed by a service at 11 a.m.

A reception will immediately follow the service in the church hall. Burial will be private. In lieu of flowers, memorial donations may be sent to the Christian Activities Council, 47 Vine St., Hartford, CT 06112. Services have been entrusted to Carmon Funeral Home of Windsor. For directions and to sign his online guestbook, please visit www.carmonfuneralhome.com.