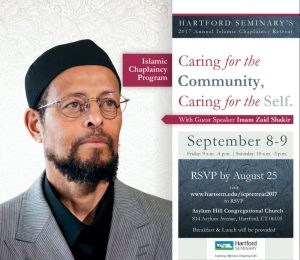 Imam Zaid Shakir, the prominent Muslim American scholar and co-founder of Zaytuna College in Berkeley, Calif., will be the guest speaker at the annual retreat in September for the Islamic Chaplaincy Program.

Students and alums from the program will gather at Asylum Hill Congregational Church for a two-day program on Sept. 8 and 9. The topic is “Caring for the Community, Caring for the Self.”

Students and alumni of the Islamic Chaplaincy Program should register at this link by Aug. 25.

Imam Zaid Shakir has taught courses in Arabic, Islamic spirituality, contemporary Muslim thought, and Shafi’i fiqh at Zaytuna College. He presently teaches Islamic history and politics. He speaks and writes on a wide range of topics and has become a voice of conscience for American Muslims as well as people of other faiths. He is regularly included as one of the Western world’s most influential Muslim scholars in The Muslim 500, an annual ranking edited by John Esposito and Ibrahim Kalin. He is also one of the signatories of “A Common Word Between Us and You,” an open letter by Islamic scholars to Christian leaders that calls for peace and mutual understanding. He holds an MA in Political Science from Rutgers University. He is one of three co-founders of Zaytuna College and serves on its Board of Trustees.
– Source: Zaytuna.edu