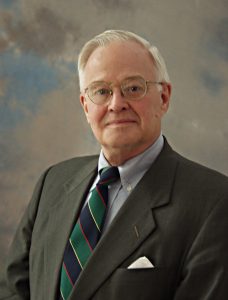 Worth Loomis, who joined the faculty of Hartford Seminary in 1994 after an illustrious
business career and became interim Dean in 1999 at the age of 75, has passed away. He was 94.

“Worth was a constructive and helpful presence at Hartford Seminary for a number of years,” President Heidi Hadsell said. “He was interim Dean the first year I was here (2000) and helped me find my feet here with grace and wisdom and good humor.”

Vanda B. McMurtry, Chairman of the Board of Trustees, said, “First and foremost among his myriad accomplishments, Worth was a servant of God. Now he has gone home to a beautiful place where he has never been before.”

The longtime President of Dexter Corp., a paper manufacturer based in Windsor Locks, Loomis was one of the original “Bishops” of Hartford who came up with the idea for Leadership Greater Hartford in the 1970s. The organization was built to “lower the barriers of race, age, education and economics in ways that would convince all residents of Greater Hartford that they lived in a fair and just community.”

After retiring from Dexter, Loomis became president of Rensselaer at Hartford, then known as the Hartford Graduate Center. He taught at Hartford Seminary for many years and was deeply committed to its interfaith mission.

Loomis’s specialty as a faculty member was business ethics and issues of faith and public life. Our prayers go out to his family.

“His care and concern for the community and for justice within the community resonated with many of us,” Trustee Clare Feldman said. “He will be missed.”

The full obituary can be read here.