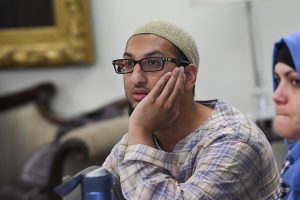 Islamic Chaplaincy student Yasin Ahmed has only been in his new job at Cornell University for a few months, but already he is making a difference.

Ahmed, who served as a chaplain at Trinity College last year, is the first Muslim chaplain at Cornell. His position is supported by an alumni organization called Diwan Foundation for Cornell Muslim Life, as well as Cornell United Religious Work. He is among 30 chaplains of various faiths who work on campus.

So far, Ahmed has worked with students worried about new federal attempts to ban travel from Muslim-majority countries and others dealing with anxiety and personal issues.

With about 1,000 Muslim student on campus, Ahmed has a large constituency, but he also makes himself available to any student.

“I’m a chaplain who’s Muslim, not a Muslim chaplain,” he told the Cornell Sun. “The goal is the common good.”

Read more about Ahmed’s work at Cornell in these two articles in campus publications.

Ahead of Official Welcome, Muslim Chaplain Responds to Travel Bans, Anxiety Among Students