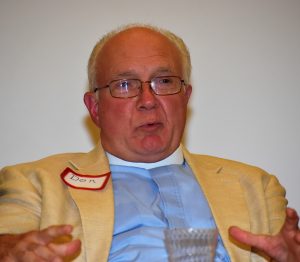 Trinity Episcopal Church in Hartford, founded in 1859, has long been an open, welcoming and diverse congregation and was the first “free” church in Hartford. The church has also had a close relationship with Hartford Seminary, engaging with many students from the International Peacemaking Program.

But diversity and inclusion was not the core of the church’s mission until its rector, the Rev. Dr. Donald Hamer, developed his Doctor of Ministry project, From Hospitality to Missional Church: Discerning God’s Mission at Trinity Episcopal Church.

A decade or more of evaluation culminated with the project, as the church worked through a curriculum called “For the Life of the World: Turning the Church Inside Out” over the last several years.

He gave the example of going from a table with sides to a round table, where everyone has an equal say.

The transformation was so powerful, he said, that the church is prepared to sell its building if it needs to because the mission stands on its own. The Episcopal Diocese of Connecticut is now involved in a similar process.