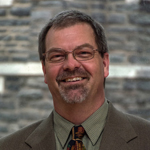 President Heidi Hadsell has announced that Professor Scott Thumma will complete his 18-month term as Interim Dean at the end of June, returning to his many responsibilities as a faculty member, Director of the Hartford Institute for Religion Research and Director of the Doctor of Ministry program.

On July 1, Professor David D. Grafton will assume the role of Interim Dean for a term of one year, until June 30, 2019. A new president is expected to take office on July 1, replacing President Hadsell, who is retiring.

“I am very grateful to both Scott and David, as I am sure we all are, for agreeing to step up and serve Hartsem in this important way,” President Hadsell said in her announcement.

Professor Grafton holds a Ph.D. in Islamic Studies from the Center for the Study of Islam and Christian-Muslim Relations, University of Birmingham, England, an M.Div. from Luther-Northwestern Theological Seminary, St. Paul, Minnesota, and a B.A. from Capital University, Columbus, Ohio.

Prior to his appointment at Hartford Seminary, he served as the Associate Professor of Islamic Studies and Christian Muslim Relations at the Lutheran Theological Seminary at Philadelphia and was the Director of Graduate Studies. He has also served as the Coordinator of Graduate Studies and Director of the Center for Middle East Christianity at the Evangelical (Presbyterian) Theological Seminary in Cairo, and adjunct lecturer in Islamic studies at the Dar Comboni Institute for Arabic and Islamic Studies, Cairo, Egypt.