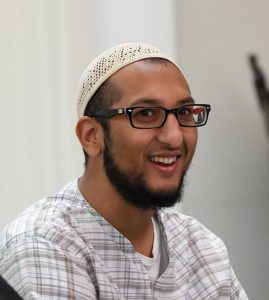 First, he says, “I met a chaplain in college when I was in my undergrad [at Rutgers], and I realized it was something Muslims really needed, and most students in general, would really benefit from having a chaplain on campus.” Then he attended an Islamic Circle of North America (ICNA) convention in Hartford where he met Tina Demo, Director of Admissions for Hartford Seminary.

“I knew it was the right program for me. but it was a couple years,” he says, laughing. “I applied and got in, and I just wasn’t going.”

Yasin says it wasn’t until he was personally ready that he decided to move to Connecticut and start taking classes. At the Seminary he was a part the 72-credit Islamic Chaplaincy Program and is now finishing up his master’s thesis  about the common issues for Muslims at American colleges.

Yasin started his work at Cornell University in 2017. Cornell is part of a public charter that doesn’t fund chaplaincies, so Yasin’s position was supported by The Diwan Foundation. “They’re a group of alumni that have been working for the last fifteen years since 9/11 to build a chaplaincy for the students,” he says. “A couple years ago we even had a student pass away on campus and there was no one for the students to go back to.”

The most rewarding part of his chaplaincy so far is the individual conversations he’s having with students who are going through personal issues, and being able to watch their growth through these trials. Yasin praises Hartford Seminary for “exposing you to people from such a diverse group of backgrounds so when you come to any context or any school you’re not surprised and you’re ready to meet people where you’re at.”

“Having that Abrahamic traditions and even more than that at the Seminary helped me prepare for a lot of what we’re doing on campus. I’m already working with a couple different groups. For example, the Jewish group helped us get Halal school lunch on campus for the first time. It was amazing to be able to have those productive conversations that are mutually beneficial; that’s a skill we learned at Hartford Seminary. I don’t think we would necessarily get that at other places.”

Yasin finds it hard to pick just one person at the Seminary who serves as an inspiration.

“On a personal level in terms of faith formation and demonstrating how to be a person of faith, I think Professor [Steven] Blackburn is one of the most gentle and warm human beings.”

Professor Blackburn is Hartford Seminary’s Associate in Semitic Scripture and Curator of the Library’s Arabic Collection. He served as a parish pastor as an ordained Congregational minister as well as pro-tem chair of Middle Eastern Studies at Trinity College.

Yasin also has great admiration for Yahya Michot, Professor of Islamic Thought and Christian-Muslim Relations. Yasin praises Professor Michot’s ability to “challenge the tradition and still be rooted in it and to really grapple with intense issues and having an open mind and being confident in our approach to religion and history. I don’t think anyone impacted me in terms of creating a space to allow us to question ourselves and to question just about anything and to feel okay about that.”

Formerly a chaplain at Trinity College, Yasin says there’s a big difference between that campus and the larger scope of Cornell. “I’m the first Muslim chaplain here at Cornell so there’s a lot more responsibility. You have students that are 18 years old and you have people doing post docs. The diversity in regard to ages is a lot different. I try to focus on the undergrad students for the most part, and now I’m starting to get more involved with the community. Because I’m in an area that’s so remote, I’m also helping out with the students at Ithaca College. I’m probably one of the only Muslim workers in 50 miles, therefore I’m being called on by my students, the community, and then also the students at the nearby colleges.”

One important message that Yasin wants to get across is the importance of Islamic Chaplaincy. “Muslim students in America are under so much stress from the environment and from their family expectations in terms of their education. So, you’re seeing most of these people for the first time kind of being uprooted and sent out to these colleges where they’re by themselves for the first time and there’s nothing grounding them and they’re looking for something familiar. A chaplain is so unique in that sense because they both have the religious tradition but they’re also able to relate to the American students and the American person.”

Yasin says chaplains are greatly needed and in short supply. “That’s why Hartford Seminary is so important because you’re learning how to deal with that context without being divorced from it. So you’re in an American school, you’re in a place that understands America and you’re taking classes where they’re explaining the context in which you are going to work in a relevant way. You’re not going into a religious institution, you’re going into a secondary institution, and the Seminary prepares you for that in a way that no other school really does.”