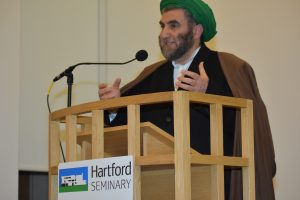 In the next of a series of lectures supported by the Imam Ali Chair for the Study of Shi’i Islam and Dialogue Among Islamic Legal Schools, Imam Mohammed Tabarssi on Feb. 27, 2018, examined the nature of death and resurrection according to Qur’an.

At the time the Qur’an  the 7th century commonly believed that time, or old age, caused death, Imam Tabarssi said. The Qur’an, however, taught that God determined when someone would die, and that death was not “annihilation but transition.”

“The Qur’an wanted to change the mentality of the Arab people,” he said. The idea was that God would not have created man if his existence was limited to this world.

Fourteen hundred verses in the Qur’an, about a third of the total, talk about the Day of Judgment, he said.

Imam Mohammed Tabarssi holds his first degree in law and Islamic Jurisprudence from Kuwait University. He is an expert in Islamic Law with a specialty in Islamic Family Law. He earned his LLM from the University of Connecticut. He is the resident Imam of the Shi’a Athna-Ashri community of New England. His forte is Shi’a and Ahle-Sunnat Jurisprudence, and he is fluent in Arabic and Persian.

Watch the video of the complete lecture.