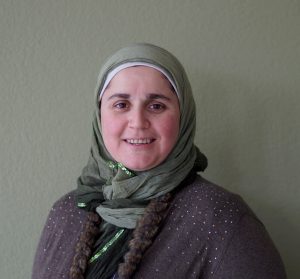 After graduating from Hartford Seminary in 2016 with an M.A. in Religious Studies focusing on Christian-Muslim Relations, Dema Kazkaz has become the first female President of Masjid Al-Noor Islamic Center in Waterloo, Iowa.

The path she has chosen is groundbreaking and inspiring, but Dema was hesitant to take it at first.

“I was struggling to find my own way. Someone who always helped me was [former Hartford Seminary faculty member] Dr. Ingrid Mattson. I would call her all the time and consult with her on what to do and we would find different strategies. She used to be my advisor at Hartford Seminary, then we kept that relationship when she moved to Canada.”

Dema says she would go to Dr. Mattson for things like consultation, advising, counseling and how to overcome the fact that the mosque’s leaders were predominantly men. Despite being one of the few women to lead a mosque, Dema doesn’t consider herself to be doing anything out of the norm. She sees her role, and the need to educate people about interfaith dialogue, as a natural progression.

“What I’m doing is claiming my position back, my Islamic right. I’m doing what I feel needs to be done here in this community. Trying to improve it and push it to progress toward having an open mind towards ‘the other.’ Challenge them once in a while to do something we’ve never done before.”

One of the first initiatives Dema worked on was a ‘know-your-neighbor’ group with about five or six local Christian women. “All of the time we are the minority and we are less in numbers. So we’ve had this relationship for probably six to eight years now.”

The women study together and sometimes go to lunch or dinner. The group was originally founded when a local Christian woman came to the Islamic center wanting to build bridges. Dema recalls thinking, “Here we go, I joined this school [Hartford Seminary] – let me use these tools. Would you like to establish something like this? A few of your group and a few of my group believe in interfaith so we can meet.”

Another Christian woman heard about the interfaith work Dema was doing, and an even bigger program came out of that. “So between our Mosque and their church, St. John’s Lutheran Church, we started with probably 10 women and right now we are up to 50. We have probably five more churches and a synagogue.”

They rotate who will host the meeting and every time it’s something different. “Last month we went to the Sons of Jacob Synagogue and watched a documentary about them because they are almost over a hundred years old in the community. That was a ‘wow’ moment for all of our members because most of them didn’t know we had a Jewish community.”

Dema has also just finished the first of four lectures about women and religion. “It was me, Erin Maden [the leader of the Sons of Jacob Synagogue], and Ruth Ratliff from the Episcopalian church. We are representing women from different perspectives of each faith. It was open to the adults and the public as well as students, and about 60 people attended. They were so happy, it’s amazing when you see that feedback.”

A local private college has reached out to express interest in holding the lectures in their community as well as two other universities.

Dema is also working on getting the youth in her community trained to speak in public. “There is so much high demand on us to speak and present our faith because there are so many misconceptions, and if we don’t step forward and clear these misconceptions, nobody will. In the same way Hartford Seminary equipped me, I have to equip others and keep the ball rolling.”

Dema says that Hartford Seminary helped humanize “the other” in her eyes. “For example, coming from Syria and growing up hearing stories about the Israel/Palestinian conflict without encountering any Jews made me so fearful and suspicious of every Jew I encountered at airports or in town. After joining Hartford Seminary I started to look at them as human beings regardless of our political differences. Now my best friend is Jewish, and we have great relations with the Sons of Jacob Synagogue.”

The most rewarding aspect of her interfaith work is seeing how people are very eager and open to listen in a respectful manner. Another crucial thing is the support Dema and the Islamic Center receive from the community. When the Masjid Al-Noor Islamic Center was vandalized in October 2016, an anonymous group was there cleaning it up the very next day.

“We got a letter from somebody and he said ‘I am very old but if you want me to sleep in the mosque to protect it for you I could do that.’ We got letters from California, from New York, just telling us, ‘We love you here you are part of this community, keep doing what you are doing and don’t be afraid.’ Madeline Albright also came and visited us. Then the Imam asked me ‘Who’s next? Is it going to be Barack Obama that comes and visits us?’”