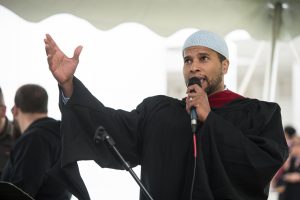 Congratulations to Joshua Salaam, a graduate of Hartford Seminary’s Islamic Chaplaincy Program and a Doctor of Ministry student. He will begin as Duke’s Muslim chaplain on July 1.

Salaam will replace Imam Abdul Waheed, who served as interim chaplain over the last two years.

“I am so excited for Joshua to be serving our community as the Muslim Chaplain,” said Aydin Anwar T’19, president of Muslim Student Association (MSA) at Duke. “He not only has many years of experience working with Muslim youth, but also understands and demonstrates his ability to tackle the challenges that Muslims in America face. “

Salaam earned his master’s in Islamic Studies and chaplaincy certificate from Hartford Seminary and is working on his doctorate in ministry.

He has a long history of civic service and community engagement.  Salaam was a counselor for Muslim Youth of North America and helped established Jummah (Friday prayer services) while serving in the U.S. Air Force.

Prior to becoming chaplain at the All Dulles Area Muslim Society (ADAMS) Center, he served as the center’s youth director, project manager for Development Group Construction in Baltimore, and civil rights manager for Council on American-Islamic Relations in Washington, D.C.

Zoila Airall, associate vice president for Campus Life, participated in the search process and observed that Salaam articulated an understanding of spiritual care that integrates a strong faith tradition with theory and practice.

She also said that he demonstrated an ability to communicate both through spoken word and song — a hip-hop and rhythm and blues artist, Salaam is a founding member of Native Deen, a music group that performs songs grounded in Islam and has audiences around the world.

“Upon his visit to Duke, many students in MSA were able to connect with him deeply,” noted Anwar, “and that type of connection is exactly what we need in order for us to unite and grow spiritually and socially as a community.”