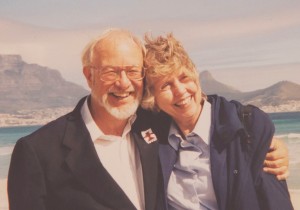 At graduation on May 11, Hartford Seminary will award two honorary degrees, one posthumously, to the founders of Plowshares Institute, the Rev. Dr. Robert A. and Alice Frazer Evans.

The Rev. Dr. Evans, known to everyone as Bob, worked as a Professor of Theology at Hartford Seminary in the early 1970s before founding Plowshares Institute, an organization dedicated to the cultivation of peace through through mediation, case-based conflict transformation training, and intensive international travel seminars. He died on Jan. 25, 2018, just days after learning he would be receiving the honorary degree.

His wife, Alice, will accept her degree and the Rev. Dr. Evans’ posthumous one.

The Hartford Seminary Board of Trustees and faculty voted to award the Doctor of Divinity degrees earlier this year. In President Heidi Hadsell’s letter to the Evanses, she cited their contributions to the mission of Hartford Seminary, including the Rev. Dr. Evans’ work here as a faculty member.

“In recent years, the two of you have been highly respected and very popular guest teachers both in the International Peacemaking Program and in the course ‘Dialogue in a World of Difference.’ You have, through these programs and courses, shared you considerable knowledge and unbelievably rich experiences with a new generation of national and international Hartford Seminary students.”

Trustees Nancy Robert and Eliot Williams nominated the Evanses for the degree and wrote: “As founders and leaders of Simbsury, CT-based Plowshares, Bob and Alice Evans worked as agents of change around the world, conducting classes in mediation, leading travel seminars, and training national, community and religious leaders in creative ways to intervene in conflict. The Plowshares organization was closed at the end of 2015 and the board voted to support the Hartford Seminary International Peacemaking Program with the remaining financial resources.”

Bob Evans was a recipient of the 2004 William Sloane Coffin ’56 Award for Peace and Justice by Yale Divinity School and received a 2017 Unitas Distinguished Alumni Award by Union Theological Seminary. He holds  three honorary Doctorates. He authored and co-authored a dozen books, including Peace Skills for Community Mediators.

Alice Evans has, among her many other positions, served as adjunct faculty at Hartford Seminary in theology and ethics. She was the co-director of the Association for Case Teaching for more than 20 years, and the author and editor of a number of casebooks, including Christian Ethics: A Case Method Approach.

In recognition of its contributions to ending the apartheid system in South Africa, Plowshares was nominated for the Nobel Peace Prize by members of the South African Parliament. Both the organization and its founders have received numerous other awards, including the 2010 Global Leadership Award of the Council of Christian Colleges and Universities.