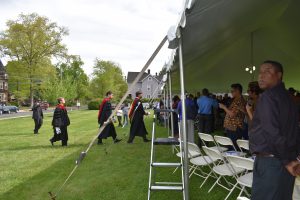 Following the conferring of degrees at graduation, Hartford Seminary writing prizes were presented to three students:

Their papers can be viewed here:

Reclaiming What Was Taken: Women’s Survival of Rape in the Book of Revelation by Jeremy Schulz
Jeremy Schulz paper

Jewish-Christian Dialogue: Dabru Emet and Beyond
Ann B. Carlson paper