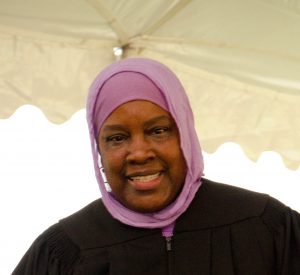 When it comes to volunteering, Hartford Seminary graduate Chaplain Asma Inge-Hanif is one of the best.

In 2018 alone, she has been recognized with two awards: the Martin Luther King Jr. Drum Major Innovation Service Award and the National Homeless Council’s Founding Mother, “Karen Rotondo Award for Outstanding Service,” the only Muslim ever to receive that award.

The MLK Jr. Drum Major Innovation Service award is awarded to volunteers who perform extraordinary every-day acts of service. The focus is to recognize extraordinary volunteers.

Being an extraordinary volunteer is nothing new to Asma. “My original degrees were as a nurse and a nurse practitioner.  How I became involved in doing this work was I discovered that there was a large number of Muslim women that were victims of domestic violence. So, I wanted to be able to make a difference.” Eventually, that led her to establish a shelter, Muslimat Al-Nisaa, for Muslim women and their children. She also works with refugees, trafficking victims and the homeless.

Her journey wasn’t without hardship. Asma was told by her community that she wasn’t taken seriously, although she had been doing her work for 30 years. She couldn’t get financial support for her shelters or foundations and eventually found herself at a meeting at Fairfax Institute, where a professor was representing Hartford Seminary — in particular the Imam and Muslim Community Leadership program.

At first, Asma thought the program was only for men.

“I’ll never forget the professor leading the discussion said that any qualified individual could apply, so I did.”

Eventually, she also completed the Islamic Chaplaincy Program at Hartford Seminary. Studying at the Seminary gave Asma the knowledge and training she craved.

One concept she enjoyed learning about was “holy envy.”

“You are allowing yourself to sit in the company of other faith traditions and tell them something about your faith that you think is wonderful,” she said. “As opposed to tearing things down.”

Sadly, Asma’s mother passed away during her time at the Seminary, but she says she’s glad she was surrounded by people who didn’t hesitate to show how much they cared for her.

“When I didn’t have the money to even bury my mother and when people in the class heard about it — I wanted to put in those two little markers — people there gave money. Muslim, Christians, Jews; everyone in that class came together and they helped. It was a wonderful experience, and people need to know go attend Hartford Seminary.”