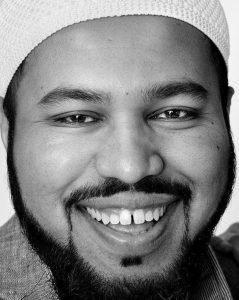 Imam Sami Aziz, who graduated from Hartford Seminary’s Islamic Chaplaincy Program and is now a Doctor of Ministry student, has been chosen to lead DePauw University’s Center for Spiritual Life. In announcing the appointment, DePauw University said: “It’s believed that Aziz, who begins his work at DePauw on July 23, will be the first Imam to ever direct the spiritual life program at a college in the United States.”

Imam Aziz, who founded the Islamic consulting firm Common Ground Services and was a frequent presenter at Connecticut schools, libraries and places of worship, described how his education helped lead him to this position.

“Hartford Seminary was instrumental in getting this position,” Imam Aziz said. “Hartsem opened my eyes to the interfaith community in America and the world. It was when I observed the documentary in one of my Hartsem classes, The Imam and The Pastor, that I shifted from interfaith skeptic to interfaith passionist. I realized that interfaith dialogue is the key to breaking down barriers of ignorance which leads to fear and hate which can lead to and has led to genocide.”

Imam Aziz has been the Muslim chaplain at Wesleyan University for several years and also worked at Choate Rosemary Hall.

“My initial interest in interfaith comes from my father who has always been a bridge builder and community service leader in whichever community he has been in. His greatest success converting a Chabad house rabbi to a friend took many years of trust building. Wesleyan University gave the practical hands on experience that I needed. My supervisor Rabbi David has mentored seven Muslim Chaplains now!”

While in Connecticut, Imam Aziz found a spiritual home in the Community of Light in Bloomfield and learned from another Hartford Seminary graduate, Ahmet Baykar, how to “bridge the gap between being an observant Muslim and an interfaith practitioner. … Thank you to everyone who has taught me, mentored me, and educated me to bring me me to this point. Keep the prayers and mentoring coming as the challenges before us are immense. My appointment opens a new path for Muslims and pluralism in America. I bear the sacrifice of past giants such as Malcolm X and Muhammad Ali and pray to open the way for the future.”

The Rev. Kate Smanik, chaplain and assistant dean of civic engagement, said on DePauw’s website that the appointment of a Muslim as director of spiritual life is an exciting moment for DePauw University.

“Sami radiates positivity and inclusivity. He has a passion for interfaith engagement, a deep respect for the religious commitments of the people around him and desire to encourage all students in their individual faith journeys. I believe that his welcoming presence will be felt immediately by our students, faculty and staff.”

As for Imam Aziz, he is excited about the opportunity and the challenges ahead as he and his wife move to Indiana.

“I’m looking forward to working with Depauw. The fact they chose a Muslim in the midst of a Muslim ban is a testament to their desire for world peace, greater understanding and interfaith dialogue.”