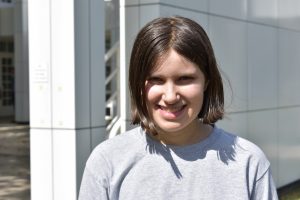 From a press release issued by the World Council of Churches Ecumenical Institute at Bossey:

As students gathered at the World Council of Churches (WCC) Ecumenical Institute at Bossey for an interreligious summer school, they reflected on what brought them to the institute, and what knowledge and insights they will take home.

The students offered perspectives from Judaism, Christianity and Islam as they worked to complete a Certificate of Advanced Studies (CAS) in Interreligious Studies from 23 July through 10 August.

Rooholamin, who holds a master’s degree in sociology and works as a researcher, heard about Bossey from her friends and her supervisor, all of whom knew of her interest in diverse religions and cultures.

Certain aspects of life can be very difficult in Iran, Rooholamin said, particularly for women. “In school, we have equality, but in the university and in employment, there is not. Women cannot go to study hall, for example.”

“I felt very excited to come here, she said. “In Iran, everything is very chaotic and, here, the sense of peace is fantastic.”

“Of course it will help me to find my own interest for the future: what can change my mind about community and society, what is good and bad about my church,” he said. “In my country, we have a very rich history and we also have a lot of difficulties and issues with a weak economy and so on. My nation is small in comparison with other nations. We only have seven million people in my state.”

As a resident of Jerusalem, Weinbach said other cultures have always fascinated him, and so the idea of studying at Bossey greatly excited him. “We are learning academically around knowledgeable people who are motivated spiritually and culturally to share as well. People here are on the same wave-length,” he said.

In Israel, there is a great search for identity, he added. “I am also looking to bring out my own identity of who I am.”

At home, Weinbach is in what he describes as a conservative group politically but one that is also very supportive of interreligious dialogue. “I understand how anybody can believe in anything,” he said “I have friends with fundamentalist believes. It’s hard to separate the emotion from the issue.”

Langston, who was raised in the Presbyterian Church, is working on a master’s degree at the Hartford Seminary in Connecticut (USA), which she describes as a multi-faith institute. Raised in the Presbyterian Church, she said Bossey students embody important goals. “We have not only an international community and a religious community but one where we are living and learning, not only taking courses together but living together and sharing meals.”

In the USA, there have been many challenging issues, especially from a political angle, she added. “The government doesn’t necessarily represent the feelings of the people, especially at the seminar where I attend. You’ll find plenty of others who find having a perspective with international cultures is crucial to what we do not only as Americans but as humans.”

She believes the USA is a nation of immigrants. “We were founded on religious freedom and escaping religious persecution,” she said. “Nearly all of us came from immigrants if you go back far enough. The problems we have politically show how much more important it is that we get an international perspective.”