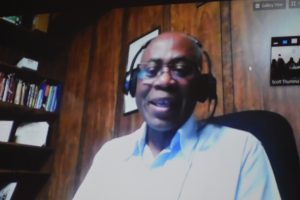 For his Doctor of Ministry project, the Rev. Dr. Joseph Ewoodzie decided to find practical ways of engaging his congregation, helping them recognize the difference between doing “for” the poor and working “with” the poor.

“After being in ministry for 15, 16 years, I had not been very reflective about what I do,” he told a gathering of D.Min. students via an online connection. Through the D.Min. program at Hartford Seminary, he said he became more disciplined and able to articulate why he does what he does as a minister.

Working at Golden Hill United Methodist Church in Bridgeport, the Rev. Dr. Ewoodzie was able to engage the congregation and work with them to make connections outside the four walls of the church.

People at the church who have dedicated their lives to working with the poor said they had never been asked to work “with” the poor rather than “for” the poor.

Professor Scott Thumma, Director of the D.Min. Program, said he was impressed by the project, which led the congregation to serve the community through real ties and not out of obligation.