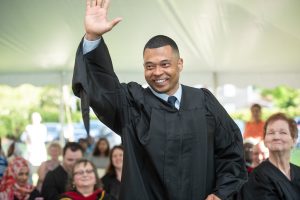 Malik Shakoor earned his degree in Islamic Chaplaincy this May, and very shortly thereafter found a position as a chaplain at Wesleyan University in Middletown, CT.

Shakoor, who grew up in Alabama, was inspired to pursue chaplaincy after joining the Army shortly after he converted to Islam at the age of 23.

In an interview with the Wesleyan Argus, he said he found a mentor in the military who talked to him about becoming a chaplain. With only 14 Muslim chaplains in the U.S. military, his path was not an easy one.

Eventually, he joined the Air Force as a chaplain and completed his training at Hartford Seminary. His job at Wesleyan began Oct. 8.

He told the Argus that he plans to bring people at Wesleyan together around food.

“I love food and I know students love food,” he said. “For the soldiers, the airmen, the one thing that would bring everyone together was food. The key aspect is not just throw scripture or religion at them, but to find out what they have in common. People have a lot more in common than they think. They may like sports, they may like art, whatever [it] may be, but once they find people with different backgrounds and find out what they have in common, it gives them a better understanding and opens the door to who they really are.”