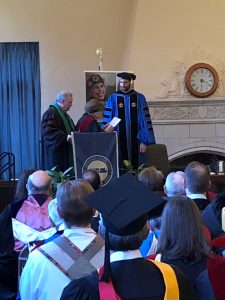 In a service that highlighted the interfaith character of Hartford Seminary, Dr. Joel N. Lohr was inaugurated on Sunday, Nov. 4, 2018, as the school’s 11th president.

James K. Robertson Jr., Chair of the Board of Trustees, welcomed the audience to the elegant Reading Room at William F. Starr Hall at the UConn School of Law, former home of Hartford Seminary from the 1920s through the 1970s.

“Today is truly a special day, and an important one in the life of Hartford Seminary,” he said. “It is also an important day in the life of theological graduate education in the world, given that Hartford Seminary has been an interfaith educational leader, promoting healthy dialogue and deepening the faith of generations of students, especially those who are Christian, Muslim, and Jewish.”

Paul Chill, Associate Dean of the UConn School of Law, also welcomed the crowd on behalf of Dean Timothy Fisher, who could not attend.

Okan Dogan, a Ph.D. candidate at Hartford Seminary, delivered the Muslim Call to Prayer, followed by an invocation from Bishop Dr. Benjamin Watts, Faculty Associate in Religion and Community Life and Director of the Black Ministries Program.

Dr. Miriam Therese Winter gave the first of three reflections, hers focusing on how she came to write the iconic “Joy Is Like the Rain” as violinist Matthew Valenti played the song. She also shared her hopes for Hartford Seminary’s future under the leadership of President Lohr.

The first three of six charges to President Lohr came from the Muslim, Christian and Jewish communities.

Dr. Ali Antar, the first Muslim Trustee at Hartford Seminary starting in 1994, and Fatma Antar, who has also served as a 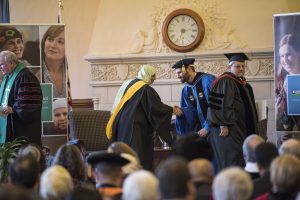 Trustee, gave the charge from Muslim communities, asking President Lohr “to support our many and diverse Muslim students, to provide them with places to learn, pray and grow in their faith, to promote healing and understanding, to stand with them when they are misunderstood or oppressed, and to promote peace through scholarly excellence in your faculty and in the classroom.”

The Rev. Dr. Ralph Ahlberg, a 1950 graduate who later earned his Doctor of Ministry at Hartford Seminary, gave the charge from Christian communities. He asked President Lohr “to honor Hartford Seminary’s Christian history of welcoming all people, no matter their background, ethnicity, religion, or creed.”

James Friedman, a Hartford Seminary corporator and a member of the Connecticut Council for Interreligious Understanding, gave the charge from Jewish communities. He first thanked President Lohr for standing on the steps of Congregation Beth Israel a week before at a vigil following the horrific shootings at a Pittsburgh synagogue that left 11 worshipers dead. “Thank you, Joel, for your quite-remarkable frankness about Christian anti-Semitism.” (President Lohr’s full remarks can be found here)

His charge included these words: “Joel, I charge you to have the entire Seminary community make all Jews, students and others, feel welcome and included as full partners in the Seminary’s mission to increase interfaith understanding and cooperation, and I urge you to run from your tent to reach out to and embrace the larger Hartford Jewish community and draw it into the rich teachings and relationships which the Seminary offers.” 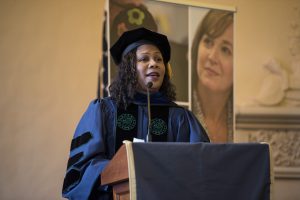 The Rev. Dr. Shanell T. Smith energized the crowd with a spoken word about President Lohr, at one point telling a story about how he folded his six-foot-eight frame down to meet her seven-year-old son at eye level.

Two other reflections followed, one by Anne Rapkin, a 2016 graduate of Hartford Seminary, and one by Joshua Salaam, a 2017 graduate who is now a Doctor of Ministry student.

In her reflection, Anne Rapkin talked about faith in the context of Hartford Seminary’s tagline: Exploring Differences, Deepening Faith. “We don’t have to intellectually accept the other’s religious orientation.  After all, ‘difference’ means just that: difference. Differences do not dissolve by our exploring them; but exploring differences from a posture of welcome, curiosity, and thoughtfulness is, I believe, absolutely essential in developing our own humanity to the fullest and in coming to know God in the other.”

Joshua Salaam said Hartford Seminary has given him an education unlike any other he could have received in America. “My classmates are Jewish, Christian, Muslim and seekers. We are being taught by professors who are Muslim, Jewish and Christian with diverse theological opinions and backgrounds. Catholic, Protestant, Sunni, Shi’a, Orthodox, Reform, conservative, liberal, gay, straight, American, International, the wealthy and the wise. We are all here. The world is here!”

After the reading of Scriptures, Chaplain Aida Mansoor gave a description of how different Abrahamic religions offer greetings of peace and asked the audience to greet each other.

Dr. Mas’ood Cajee, who got to know President Lohr in his previous position as Dean of Religious Life at University of the Pacific,

then formally introduced him. He called President Lohr a “shepherd.”

“In the Abrahamic scriptures, being a shepherd was actually a strict job requirement for spiritual leadership,” he said. “In today’s world, where it is more critical than ever to nurture prophetic voices, raise transformational leaders and build beloved community — Dr. Lohr has the patience, perspective, fortitude, and courage to be a shepherd.”

In his inaugural address, President Lohr spoke about his first few months at Hartford Seminary and told several stories that relate to the institution’s long history. He then turned to the Scripture readings and described how they relate to the work ahead.

“I am convinced that God is doing something new, even while the old—the historical realities of the past—are combined with them, and can never be discarded or erased,” he said. 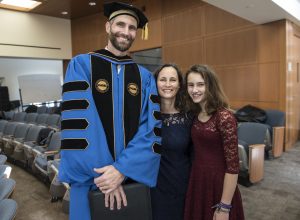 What’s next for Hartford Seminary? President Lohr compared the Seminary to the Blackberry phone, which ceased production in recent years because it did not adapt to a changing business.

“To avoid a similar fate, we must continue to blaze new paths, and provide compelling, relevant educational experiences for a new generation of students and professionals. Thankfully, our narrative is one of hope, and we can capitalize on our history, one that is now nearly 185 years in the making. We have some of the most intelligent, thoughtful, and unique faculty in the country—from core faculty, to faculty associates, to adjunct professors. If you have not met them you need to. They are leading the nation in women’s leadership, in Muslim-Christian Dialogue, in religion research, in oral interpretations of the Qur’an, in congregational renewal, in holistic approaches to New Testament interpretation, in Islamic chaplaincy, in Christian theology, in Shi’a Studies, Arabic Studies, in the study of Hebrew Bible, and in the important world of Black Ministries.”

After the inaugural address, violinist Matthew Valenti played a Metallica piece that President Lohr introduced as one of his favorites. Rabbi Debra Cantor, a Hartford Seminary Trustee, delivered a rousing benediction. A reception followed in the Meeting Room at Hartford Seminary.

A professional photo gallery and video of the inauguration can be found at this link.