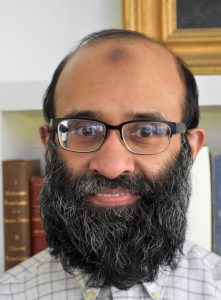 Adjunct Professor Suheil Laher had a different path in mind when he moved from Zimbabwe as a young man to study electrical engineering at the Massachusetts Institute of Technology. But the events of Sept. 11, 2001, changed all that.

“I had always been interested in religion,” he said, having memorized the Qur’an as a boy. The events of 9/11 turned that longstanding interest into a desire to learn more. “I guess the event and the whole situation led to me realizing the need to better analyze my own religion, and the need for dialogue with others.”

First, he earned a Master’s degree in Religious Studies at Boston University, graduating in 2007, while also working in software. Dr. Laher then applied to Harvard’s Ph.D. program in Near Eastern Languages and Civilization with a concentration in Arabic. He completed that degree in 2014, and moved to Virginia to work for the Fawakih Institute, which focuses on teaching classical Arabic.

He then moved back to Massachusetts and began teaching Arabic and other courses at Hartford Seminary, as well as continuing to teach online courses for the Fawakih Institute.

At Hartford Seminary, Dr. Laher is teaching Introduction to Islamic Theology this fall and working with Ph.D. students on their Arabic. This spring, he will offer Hadith Methodology: History and Transmission of the Prophetic Sunna.

“I’ve been enjoying teaching here,” he said. “The students have been very engaged, very receptive. They are also pretty diverse … It allows for more to be discussed.”

Dr. Laher said he enjoys being part of a seminary where students are religiously committed in contrast to other settings where religion can only be discussed from an academic perspective.

In his Islamic Theology class, for example, his Muslim students are joined by a rabbi and a Christian theologian. “It’s nice to have their perspectives and questions,” he said.