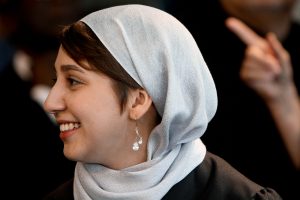 Maggie Siddiqi, who graduated from Hartford Seminary’s Islamic Chaplaincy Program in 2016, has been named the Director of the Faith and Progressive Policy Initiative of the Center for American Progress, the Washington, D.C.-based organization announced this week.

Siddiqi will lead the team “in advancing a progressive vision of faith and religious liberty and engaging a network of faith leaders.”

Previously, she had served as Director of Communications and Strategic Initiatives at the El-Hibri Foundation.

“Now more than ever, Maggie’s voice is needed to help define the fundamental values that should guide our country,” Winnie Stachelberg, CAP’s executive vice president for External Affairs, said in a press release. “She can articulate a moral vision for the nation on issues from religious liberty and human rights to criminal justice reform, immigration, and social and economic equality.”

A Wesleyan University graduate, Siddiqi did her Master of Arts in Religious Studies with a focus on Islamic Studies and Christian-Muslim Relations at Hartford Seminary. She also earned a graduate certificate in Islamic Chaplaincy and did her field training at Medstar Georgetown University Hospital.