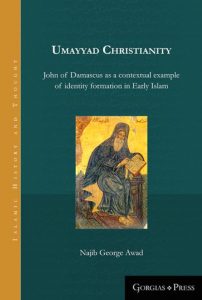 Umayyad Christianity: John of Damascus as a Contextual Example of Identity Formation in Early Islam is described by the publisher as “a study of the identity-formation process that the Christians of Syria-Palestine experienced during Umayyad Caliphate.”

The book, according to Gorgias Press, “approaches this subject by using John of Damascus and his writings on Islam as a case-study. This provides an exhaustive study of the available historical data in order to stimulate some further thought on John of Damascus’s theology and legacy from a contextual and intercultural methodology. Such an examination has not yet been pursued in the scholarship of Byzantine Christianity during that era. Proceeding from a centralizing ‘context’, the monograph revisits John of Damascus’s legacy (and the Umayyad Christians’ identity-formation of that era) from the perspective of his historical, Islamic-Arabic context, and not from any assumed, mita-narrative, common to contemporary pro-Byzantine theology scholars.”

Harford Seminary will host a book talk for Professor Awad on Monday, Aprl 29, at 7 p.m. in the Meeting Room.